Skip to content
The South African government is providing South Africa with regular updates on the coronavirus pandemic on the official sacoronavirus.co.za website.

Kopano and his two friends live in a village in the Northern region of South Africa. A year ago they participated in a training process to help them conduct a program of spiritual empowerment for younger youth. When Kopano was going through the training, he had doubts about his ability to facilitate a group. He felt he had a bad reputation in his community and people would not take him seriously. Despite all his doubts he gained the courage to go back to his neighbourhood and gathered some youth to form a group. He began working with them. They studied some texts, carried out service activities and played sports.

Over time this group became one of the vibrant groups in the area. The youth really love their group and Kopano, and they have very strong bonds of friendship as deep as best friends. Kopano is also very close with the parents of the youth, who even call upon him for help when they have challenges with their children. The youth are also very open with him and share their troubles. For example, one of the youth had problems at home with his parents. They were drinking a lot of alcohol and he would find them drunk everyday after school yelling at each other. It made it difficult for him to concentrate on his studies in that environment. Kopano paid the mother a visit to talk to her about it. She was shocked because she didn’t realise that they were affecting their child that much. After that conversation things improved – the parents reduced their drinking and the yelling stopped.

Kopano cannot believe the transformation he has seen in himself. He said, “I don’t know what happened to the old Kopano who always used to drink and get involved in fights.” He says some of his friends are also surprised by the “new” him. His parents are also very happy. He says his grandmother would come on Friday nights, open the door of his bedroom to check for his presence and would be surprised to find him there. She said, “Whatever they shared with you must be really good…” .

Seeing all these good things happening to him and his young friends, he felt that this could be good for many others who had similar experiences. So he invited some of his friends and brother to participate in these community building efforts. Some of them were trained and now have groups of their own. 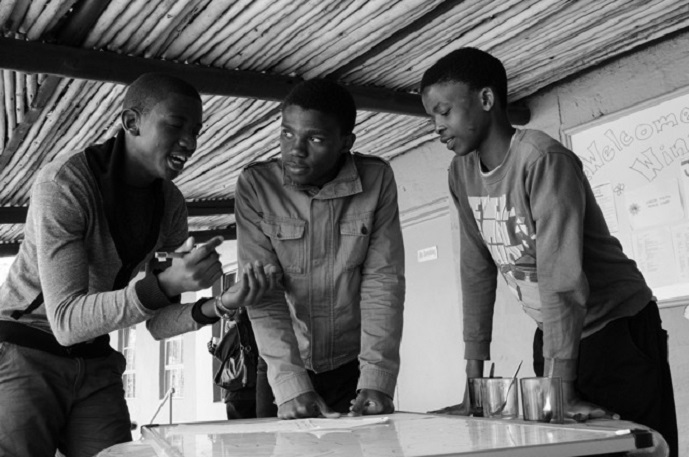